You’ve been Volunteered into the Jelly Army

You’ve been volunteered into the Jelly Welcome Army!

When I was in the Army, I was often “hey you’d,” as we would say.  “Hey you, you just volunteered yourself to stay tonight and clean out the 1st Sergeant’s office.”   Of course, I was thinking more like, “hey whaaaaaat?”  As time goes by and the more things change, well, the more things stay the same.  Hey You, you’ve been volunteered to be part of the Jelly Welcome Army!  (Don’t worry, I clean my own office.  Ok, that’s not true, but it gets cleaned somehow.)

As StreetJelly grows everyday, a warm welcome to new users and artists into the Jelly Nation goes such a long way.  So all my Jelly Friends, please take these few steps whenever you see a new musician or viewer on the site.

The key to being part of the Jelly Welcome Army is to remember how you first experienced StreetJelly in the early days.  I know we all have fun on the site now, go a bit nuts with smileys, and joke some really bad whoppers.  But remember that a musician’s performance is like an invitation into their living room.  We wouldn’t want to be invited in someone’s house and ignore their presence.

I hope we’ve been able to give everyone (as much as humanly possible) a warm welcome when they found StreetJelly.  Now it’s your turn to return the same welcome to all the new people.  Pay it forward and many thanks, Jelly Friends!
~frankie

Any other tips how to welcome new viewers and musicians?

If anyone had told me that I’d develop online friends who could become more like family I would have laughed. But that is truly what I’ve found on StreetJelly. We’ve become a community of people who laugh together, cry together and share our lives with one another. Now if that isn’t family then I don’t know what is.

When we first started out on StreetJelly, we didn’t really think that anyone would listen to or even like the kind of music that we played, but the support we have found is mind blowing. We have quickly developed a steady group of people that offer their encouragement and applause to the shows that we put on. I have seen the growth in my own family that has occurred since we started performing for our wonderful fans. Many of you have watched my son, Robert, sing, play piano and tell jokes as well as interact with those who watch us. But what you may not know is that due to his autism, he is usually a withdrawn child around new people and struggles with communication. However, the encouragement he has found on StreetJelly has helped him to open up and not only enjoy but look forward to meeting new people. I have also noticed a new found confidence in myself that I never imagined I could have.

The feeling of family was demonstrated to me on Saturday, April 6, 2013. As many of you know that was the day that Merv asked me to marry him. Together Merv and Frankie rallied the whole community to be there and help to make that day one I will never forget. To see all the work that went into such a spectacular night and to know that so many people cared and wanted to be a part of our big night was overwhelmingly touching.

That night started like any other, but when we began our show the number of viewers skyrocketed. Never before had I ever seen so many people all watching one show. I was blown away by the sheer number that amassed to watch us. Then the big moment happened as Merv asked the question that I have waited my entire life for and it may sound bizarre but I could hear the applause from our family that night. I have never felt as much love overflowing as I did that night. I thank everyone who came out to be a part of that amazing experience, especially our King, Frankie, you rock. You truly helped to make it a magical and unforgettable event.

As I write this I am reminded of the words of a song that my family and I close every show with and I know beyond a shadow of a doubt that these words apply to each and every one of you in StreetJelly land.

Watch StreetJelly from your iPad and iPhone

Q:  Can I watch StreetJelly from my iPhone?
A:  Yes, with the Photon Browser app.

There is a Flash compatible browser, called Photon, that can stream StreetJelly performances on an iPad, iPhone, iPod.  Below is a screen shot taken from an iPhone 4.  Photon is an alternative browser to Safari for mobile Apple products.  It works the same way as any browser:  just navigate to a website as you would on the regular browser.  Photon works for any Flash enabled website, including those with Flash games like Facebook.

The StreetJelly website is obviously very small on a phone, the better experience is on an iPad.  But this gives us good insight as we develop our mobile apps for StreetJelly.  It’s not just a matter of “shrinking” down a website to fit on a mobile device.  We want to make sure the experience fits for when you are mobile, verses sitting at home or work in front of a pc.  In the meantime, check out the Photon Browser.  Cost as of this time is $3.99 on the iTunes App Store. 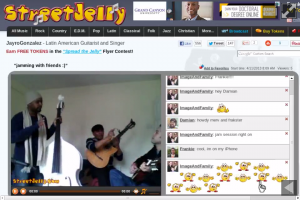 Taken from an iPhone 4 with Photon Browser