First Gig Advice from a Newbie

First Gig Advice from a Newbie, by Rewind 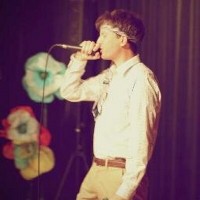 After watching other shows on StreetJelly for a few weeks, I decided it was time for me to test it out from the other side of the webcam. I had seen and listened to how things sounded through other people’s gear and knew what I wanted to do. Also, I had made connections with other performers who ended up tuning in to my first performance.  I purchased a webcam for the video (since my computer is ancient), and I used the same gear I have previously used for recording to handle the audio (mics, mixing board, audio interface). Here are a few pointers for your first broadcast:

I had a blast with my first show on StreetJelly, and I plan to be a regular.  It was fun to be able to interact with music fans I had never met before. Think of it like you would any other gig. It’s all about playing great music and connecting with the viewers. If you just play songs and don’t interact at all, it doesn’t create a great experience. One last thing:  have fun!