This past week, we had an opportunity to broadcast two live shows from different venues.  First, our own Rewind had a Friday night gig down at the SawWorks Brewing Company in Knoxville’s “Old City.”  Then, on Saturday, we broadcasted the Hundred Acres band on stage at Sound Biscuit studios.  Each broadcast was different, but with some very simple equipment set ups, the sound and streaming came out crisp and clear.

Most musicians will eventually find themselves performing at night clubs, cafés, open mics, etc.  Rewind, a StreetJelly and local Knoxville musician, performed a Friday night show in the confines of a typical brew-pub.  The venue was an industrial warehouse converted to gentrified hipster hangout (just kidding, it’s a very nice place with super nice people).  It was a last minute decision and permission from the owner to broadcast on StreetJelly.  With ten minutes to go before the show started, we fired up the laptop, plugged in our regular webcam, and pulled out a new-in-box Blue Yeti USB microphone.

First, a brief description of the live music and venue.  Rewind and band mate, Thad Bissett, were set up with typical gear: two guitars, mics, foot pedals, mixer board, two PA speakers (one for the room and one as a monitor).  The room size fit a half-dozen large round tables, a bar that ran the length of one wall, and a counter / register area by the front door.  About 25 people were present at the time. It was probably not the best space, however, for producing live music: concrete floors, brick/cinder-block walls, and an exposed metal truss ceiling.  Anyway, Rewind and Thad had their gear set up sounding good for the room. 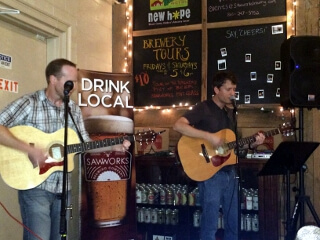 For the StreetJelly broadcast, we unwrapped the Blue Yeti and connected the USB into the laptop.  (No software applications were running at the time, no browsers, and no connection to SJ.)  The installation software already exists within the mic.  So when connecting the USB cord, the Blue Yeti installs itself.  The installation took only a few seconds, and the laptop did NOT need to be rebooted.  We opened up a browser (Firefox), navigated to StreetJelly, and everything was ready to go the first try.  (I’m still amazed how easy this worked.)  We placed the mic about 10 ~ 12 ft from the stage, and set its selector position to bi-directional stereo.  Basically, that means the two internal condenser mics pick up sound at 180° apart.  On the mic, we set the gain around 1/4 from the lowest setting.  On StreetJelly, we set the sound input around 1/3.  That’s it!  Really, that was it.  Sound was very clean with no distortions, pops, or clicks. 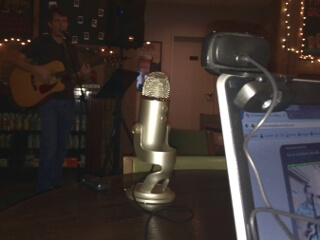 Next up was broadcasting a 6-piece band, called Hundred Acres.  This was a full professional stage set up in a large corrugated metal building, with half the side opened to the outside.  The space held a 100+ guests inside and out.  Sound Biscuit is a professional recording studio, so needless to say there were more mics, cables, speakers, spot lights, and cool stuff that one could count in any single glance.  Oddly enough, however, the main sound board did not have an extra stereo feed out.  It was already being used for something else. 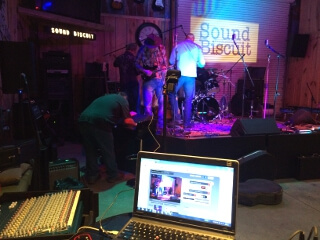 Our solution was to place two (cheapo) dynamic mics close to the main PA speakers from the stage.  Again, we always recommend going for the simplest set up for streaming on StreetJelly.  You can see in the pics, we placed each mic around 18″ from the center of the PA.  Note: make sure you place the distance of each mic from the PA the same for each channel.  This will make balancing the channels later much easier. 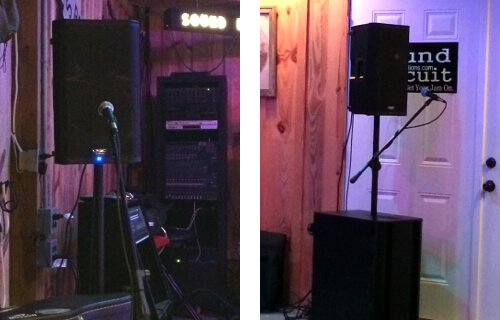 We plugged in the two mics’ XLR connectors into our Alesis USB Multi-mixer.  This device then plugs into our laptop via USB and gets recognized as any common sound input device to the computer.  We have used the Alesis many times on this laptop broadcasting on SJ, so the computer already was configured for this.  We did have to tweak the gain and output levels on the mixer, but nothing out of the ordinary.  Phantom power was turned off. 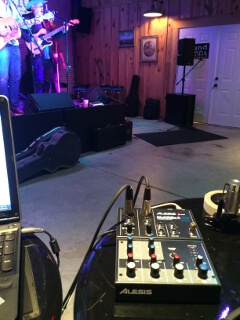 Again, it was a very simple set up to broadcast: two dynamic mics shoved close to the main PA speakers, the USB mixer, and the same Logitech webcam we always use.  The sound streamed extremely well.

When you are broadcasting a live show, it’s always tricky to know exactly how well it sounds over the internet.  Listening to headphones from your computer or from the mixer’s main-out is virtually impossible to give a good indication.  The sound in the room almost always overpowers the headphones.  Yes, asking the audience “how does it sound?” is extremely important.  But sometimes the best way to check is to check yourself.  In both broadcasts, we took our mobile phones outside (way outside), plugged in good studio headphones into our phones, and watched the actual StreetJelly broadcast ourselves for a true sound check.  It’s the only way to know for sure.

A Word about WiFi

In both cases, we used our Verizon Mifi / Jetpack device to connect to the internet.  It’s 4g capable and almost always streams well for StreetJelly shows.  But in both cases, especially in the industrial warehouse gig, the wifi signal cut out a few times.  It was very brief, but enough to cause the stream to buffer.  Next time, we would really like to get a dedicated wired internet connection from the venues.

To recap, keep your configuration as simple as possible.  In our scenarios, the show’s sound was separate from broadcasting.  Let the musicians and sound engineers do what they do best.  Then, capture that sound from your own mics for your broadcast.