Ever notice a live stream that has audio a little off from the video?  We’ll help you fix that when broadcasting with OBS Studio.

You often hear audio issues called “lag.”  However, that term gets confusing since many people use it as a catch-all phrase.  Let’s define when people say lag, but really mean…

Latency  Latency is the term we use to describe the time it takes from the broadcaster to send his or her stream up to the internet, travel across the planet, and get pulled down to the viewer’s computer.  Many factors determine how long this can take, anywhere from a few seconds to 20 or more seconds.  This time is based on the internet speed of the broadcaster AND the viewer.  Different viewers will experience the live broadcast at different times than other viewers.  As a broadcaster, you all have experienced this when you ask your audience a question and have to wait until they respond.  Improving latency is a factor of improving your internet connection (upgrading to a better ISP or broadband connection); and reducing the amount of data your stream (turn down your broadcast quality).  We’ll go into more detail about improving latency in another blog.

Audio Sync  Audio Sync is today’s topic.  It is the synchronization of the audio with the video.  When the audio and video get “out of sync,” you witness the phenomenon where you see the lips move but hear the voice slightly later, or vice versa.  It is like watching a badly dubbed foreign movie.  There can be a number of contributing factors why this occurs, but the chief reason is a slow computer / CPU.  It takes more cycles, or computing power, to process video than it takes to process audio.  The audio is often ready to stream slightly ahead of the video.  When a chunk of audio data gets combined with a chunk of video data that represents two different points in time, the broadcast will be out of sync.

OBS is great broadcasting software and handles many sophisticated internal features.  It typically requires more computing power than simple one-cam broadcasting from within a browser.  Audio Sync issues do appear more often when broadcasting with OBS.  However, there is an easy fix to this problem (without having to upgrade your computer to a monster size CPU and GPU).

In OBS, adjust the “Audio Delay” to bring the timing of the audio precisely in with the video. 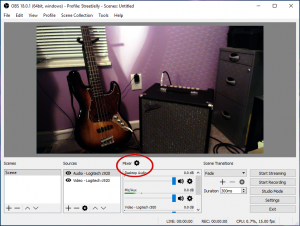 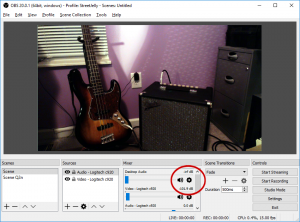 Find the audio device you want to adjust and enter the number of milliseconds (MS) to slow down the sound.

When you are all done, you are ready to live stream.  OBS will remember your delay settings for the next broadcast.  But it is good practice to occasionally recheck as your audio/mic setup may have changed in your studio, your computer may have upgraded to newer software, and so on.

A note about “video delay” and your studio sound setup.  For musicians who use a sound board, mixers, auto-tuning, delay pedals, etc; the audio delay may be attributed to the processing in the sound system itself – and not in OBS or your computer.  This is generally the cause when video comes in first and the audio comes in behind.  The fix here is to delay the video so it slows down to match the audio.