How to get a Thousand Viewers?

Here’s a clue for you. If you want to set records for the most viewers in an online show, own the world record for the most tips, become an internet streaming pop icon, and maybe even have some fun while making a little scratch; here is all you need to do…

So where do we start? At a show with no viewers, of course. We have all been there. No fun at all. So what should you do? Get viewers! Not too difficult really. What is your mom doing? How about your best friend? Where are you fans from the real world? Did you invite them? Are you using the twitter link? Did you post your show on Facebook? It doesn’t take much time to post a message telling your friends that you are performing.  Also, it may seem like such a small thing, but it’s amazing how much people respond to the personal touch. Send them a message to ask them out to your show.

You can get a little creative, too. How about posting, “live music no cover with free imaginary drinks,” on your favorite social venue. It works! Try it!

If you have the computer savvy, try using Photoshop, or other such programs, to create posters for your shows. You can post them on Facebook or any other social media type sites to help get your name out there. Print a couple off for your job, friends, and acquaintances. (editors note, i.e. Frankie – try BandPosters.com)

Next, Don’t Suck! No one wants to hear the beginning of Stairway to Heaven sixteen times only to listen to 4 bars of Smoke on the Water. One song well performed is worth more than 100  hours of garbage.

Are you interacting with your guests? Ask them if there is anything about your show they “don’t love” (answers could hurt, but you’ll get an answer).  Want to engage someone? Ask them about themselves.  Be gracious and friendly. Support other artists. Support other artist supporters. Try dedicating a song to your viewers, it’s a great way to show them that you appreciate their support.

It helps to acknowledge your viewers. They are “gold” to you. Try to mention EVERY visitors name. People LOVE hearing their name treated respectfully. Keep an eye on the comments, clappies, and tips. You’ll get a good idea of what works and what doesn’t. Play what the audience says is good (another hard pill to swallow). Let them tell you if it’s good.

Be aware that every show is different. It’s all good. You can do a killer show with only 5 viewers or a horrible show with 20, and those five viewers will come back.  I’ve even found that mistakes I’ve made in a performance are not always caught by the audience. They can still be entertained by a less than perfect show.

The idea is to keep your nose to the wheel. When in doubt, PLAY!!! As it has been said, “If you build it, they will come”. StreetJelly beats performing on your sofa alone for your metronome. People will come and go, but your (total) viewers will accumulate!

Don’t just be a performer in an ivory tower. Watch other shows! Become an active part of the StreetJelly community. There are a lot of people participating in the StreetJelly “thing.” Making new friends, and showing an interest in other artists will foster a curiosity about you, in viewers of other shows. Also, glean from other shows. Nobody knows everything. There is more to know about performing. You can learn a lot from what other people do. Stand on the shoulders of the giants that have gone before you. And, if you can’t stand a show then I like to say, “take the chicken and spit out the bones.” Take the stuff that works and try it. It can be a big help.

“Not sucking” contains a few ingredients. It’s more than playing your instrument, and singing in key. Your overall image as a performer is huge. An engaging, friendly player/singer will do better in the long run at this racket than a pure virtuoso that has the personality of a cardboard box. That doesn’t mean that you need to be something you’re not. It means that consideration for your audience, and their desires will be rewarded in the long run.

The most important part of a successful show is to have fun. If you are enjoying yourself it will show and it will rub off on your audience.

Lastly friends, you are a visionary, so pony up. You have seen that the internet age is going to change the world. You have stated that eventually everyone will want to interact directly with their favorite artist. You know that this is the herald of a new age for performance of music. Time to pay for your entertainment. What? Oh yes we have to make this work from both ends. Why should someone believe that this is a legitimate venue and support you when you wouldn’t support it yourself? Where is the crowd? What are you?

I had this question come in the other day, it’s always worth repeating for everyone.  ~Frankie 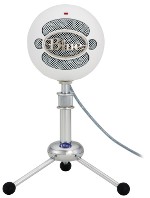 What do I need to have a good broadcast quality?  -Bob

Hello Bob,
The best way to get a good broadcast is to have a quality mic input for your computer.  Most webcams these days all look great – so any decent webcam you can find at Walmart will do fine.

For sound, it depends a lot on the type of performance you put on.  If it’s a singer-and-a-guitar kind of show, then all you need is a good USB “podcast” mic.  We recommend a Blue Snowball ($50) – http://amzn.to/1u3MyaT

For a more complicated setup: multiple mics, amps, keyboards, etc – the best approach is to mix them (with a multi-mixer) before you connect it all to your computer.  A great product to do this is an Alesis 4-Channel Multi-mixer (under $60) – http://amzn.to/1vt77Nt  Like the Snowball mic, this is a USB plug-in to your computer.  Your computer will see all your sound as one simple mic input source.  They both give great sound and make it VERY easy to hookup.

The key here is simplicity.  I’ve seen it many times over where tech-gurus try to perfect their sound with computer software – especially those who use a computer as their mixing board, effects machine, and so on.  It just takes much more processing power (CPU cycles) for your computer to mix multiple sound inputs AND broadcast the video upstream.  And there are always a zillion more things that can go wrong.

So the advice is – process everything before it gets to the computer you are broadcasting from.