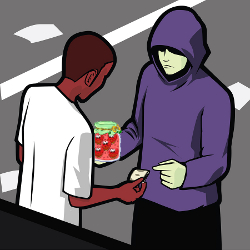 Interpol is on the lookout for the global distributor of a new but highly addictive substance called STREETJELLY. The mastermind appears to be a deceptively congenial programmer named Frank Podlaha ( AKA “Frankie” or “The King” by his minions on the STREET)

He has single-handedly constructed an elaborate system which enables performers to connect with audiences ANYWHERE ON THE PLANET! At first look, this seems innocent enough… but now, health care providers around the world are reporting an epidemic of symptoms that indicate a new addictive substance has been unleashed.

Symptoms include the following:

If you have any of these symptoms, don’t bother reporting it because there is no cure. Your best bet is to surrender and enjoy the euphoria.

PS: it’s not illegal (YET)… but federal agents say it’s more fun than a lot of things that ARE illegal. Your call.