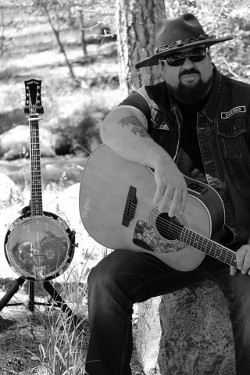 Introduction:  Thanks to Frank Podlaha, creator of Street Jelly. This live streaming music site has been an inspiration to myself on many different levels. Oh, let me count the ways …although there are too many ways to count: Jayro from Dublin inspired my version of Black Magic Woman by Santana, Remy de Larouque from New York inspired my version of Skinny Love by Bon Iver, Quint Williams from NY does a great version of June Apple, Ben Brady sings classic country from the heart, others make me want to sing better, Image and Family (Merv, Amanda, Robert) bring light hearted sailors songs with a splash of pirates from the past to life, Kurt Van Hook kills it with great lyrics and heartfelt melody, Sue Rarick with folksy voice and great guitar. The list can go on and on, so be sure take a listen for many great artists on Street Jelly.

Now on with the Finger Picking Madness. When I started playing guitar at the ripe old age of 22 (1992), I was convinced that a guitar pick was the way to go. So my training began. I was able to control the pick after about 5 years of practice. Yes 5 years, I did not have a natural gift for music other then I liked it. So I started playing local clubs, weddings, churches, funerals, on the street, dude ranches, etc. Even though I pretty much sucked, I was able to make enough money to at least keep this serious hobby alive.

I was a cover tune king, garage band junkie, but quietly and always in the back room out of site, I was writing my own tunes and lyrics. In 1998, I finally recorded my own acoustic CD – Shining Through in Alamosa Colorado. You can give it a listen sometime at http://www.cdbaby.com/cd/trujillo . At this time I was still using a guitar pick and I thought I was pretty good at it, yes delusional, but sooner or later you manifest what you think. So be careful of what you think.

From 1998 to 2008, I worked on several musical projects, started a recording studio, lost a lot of money and time, and then everything came to a screeching halt. I actually sold all my musical equipment and stopped playing music until October 2012. I lost all my direction and I forgot why I was doing music in the first place. Oh, but this is not the end of this journey. During this hiatus I did build a custom Stratocaster, and to this date I have never plugged it in. I started the build in January of 2012 and finished it in December 2012. Crazy I know.

In October of 2012 my brother invites me down Colorado to play in the Colgate Country Showdown. At this time, I do not own even an acoustic guitar, just a custom electric guitar and a ukulele I bought for one of my kids. I went down to Colorado and my brother had an acoustic guitar for me to play. Now this guitar was hard to play, like a fence post with piano strings. My fingers were screaming for mercy since I haven’t even played a guitar in years. Ouch.

While I was in Colorado practicing for the country showdown I was able to listen to a few bands in the area. One particular was a bluegrass band from the east coast, do not recall their name, but they were great and they gave me an idea to start a new project. This project is called Two Roads.

I get back to Wyoming at the end of October 2012, by the first week of November 2012 I have written 12 bluegrass tunes on the ukulele. I need to buy an acoustic guitar to move my project forward. I am brain storming at this time, my mind is in a musical flurry. I hear music around every corner, I think music, I feel music. Now I have to spend money to restock my equipment to play music again. At the same time I am surfing the web, looking for online musical outlets. I was led to Street Jelly and joined the site around the end of November 2012. During this flurry I am thinking hard, that is where the finger picking madness begins. I have never been a finger picker but I need to try.

I start researching vids online about finger picking. Oh mercy! I try and I try to no avail. My fingers will not work and I cannot understand the concept of the Travis pick. I am feeling musically retarded (lack of better words). I watch and listen to hundreds of videos online closely without result. I feel sad and hopeless, like I am an old dog that cannot be taught new tricks. I need to finger pick. I actually give up after several hundred hours of trying. High expectations indeed. Yes, I live this way. 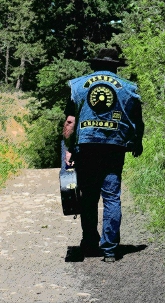 By the first of December I am done with finger picking madness. I quit. Two days go by since I came to the conclusion that I cannot finger pick. Then, I sit down quietly with my guitar in my hands and BAM! I start finger picking without even thinking about it. It is almost as if I have been doing it all my life. Almost natural. In the meanwhile, I begin playing some music on Street Jelly which is a great venue for me to get this current project out to the public. I struggle with online sound for a bit (about 40 shows) and still do from time to time, but Street Jelly inspires me to press on and to never give up. My finger picking skills are developed with new music and Street Jelly shows in real time, live and online. To boldly go where no man has gone before, to seek out brave new humans to listen to music, and live with fellow artists on the wonderful world of Street Jelly. A little dramatic to say the least, but so very true in my mind.

So here I am today. I have received many compliments from listeners and viewers via Street Jelly on my finger picking skills. Several folks have been inspired by my Two Roads musical project in many ways. Inspired in ways hard to imagine. Some inspired by the musical content, some inspired by the sound, some inspired by my finger picking madness. I thank you all because I am also inspired – by you. The moral of this story: never ever give up, you can do whatever you put your mind to no matter your age. Be well on your fantastical journey and I will see you on the Street Jelly. Damian

A StreetJelly poem by Damian Trujillo 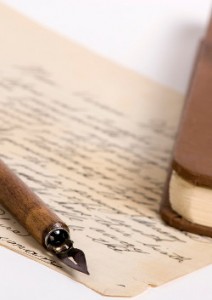 The day is long on the StreetJelly
Pupils start to dialate as you pick up that tele
Pick up that stratocaster, gibson acoustic delight
did you hear a stray cat strut by tonight

At 8 am you may hear a crooner
Sometimes the music  will come along sooner
24 hours a day what can go wrong
lost connections, oh my in the middle of the song

From England and Ireland, Netherlands too
Oh  StreetJelly  Oh StreetJelly the things you do
Some sing like the angels, others unique and true
Free, free, free the music for you

Who is going to set this to music?